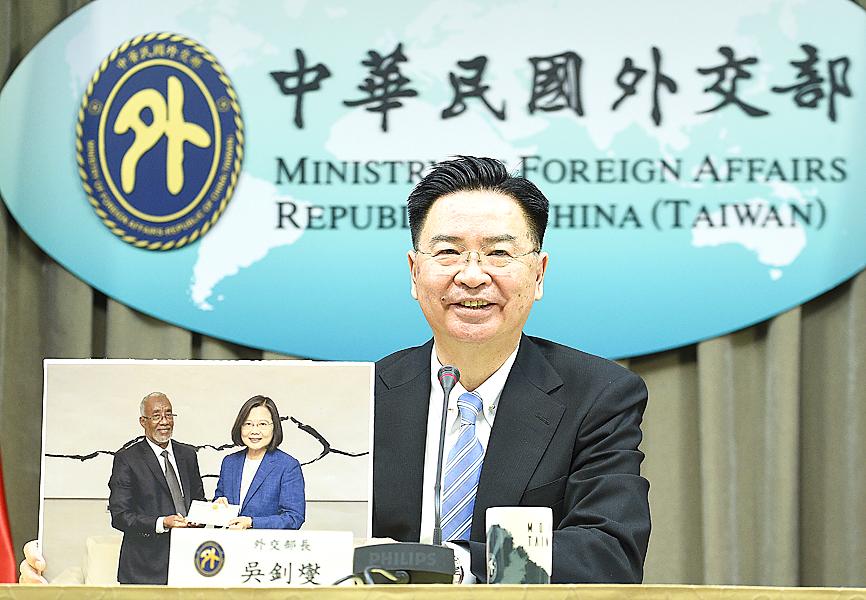 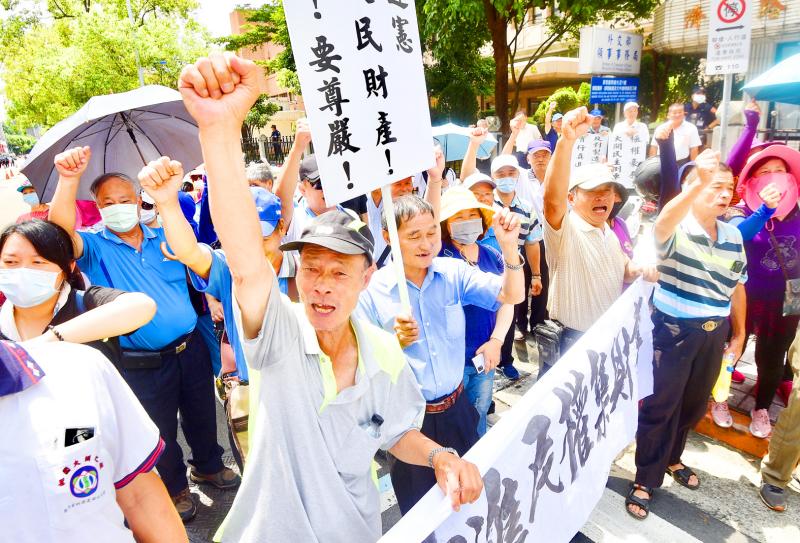 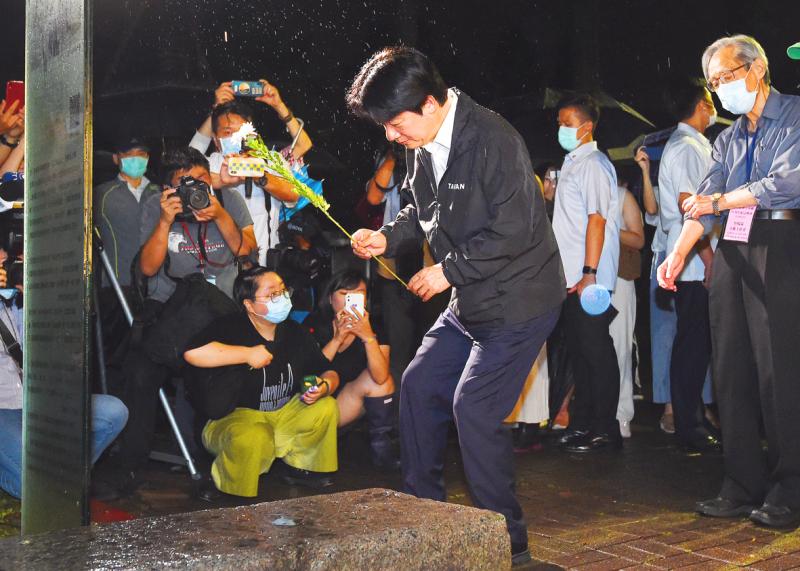 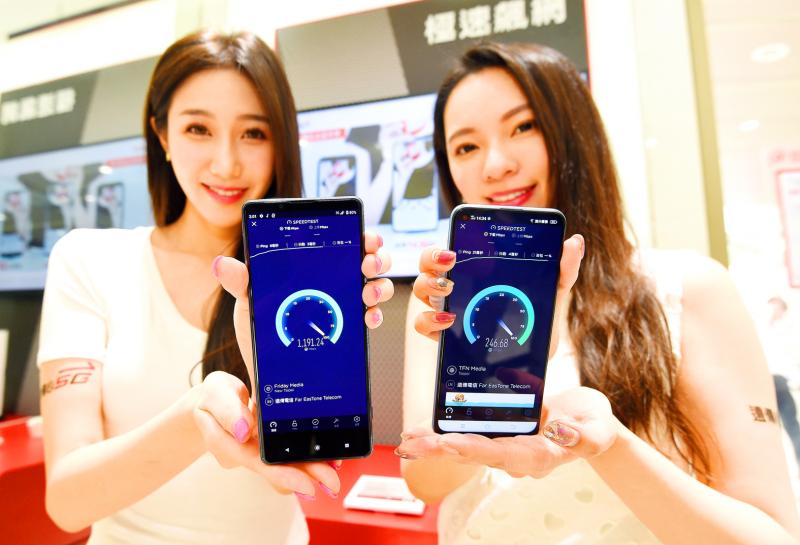 That implies about 3.54 million subscribers switching to 5G, based on the company’s 7.08 million subscribers as of the end of February. Models demonstrate the speed difference between a 5G handset, left, and a 4G phone, right, at a Far EasTone Telecommunications Co news conference in Taipei yesterday. The company started its 5G services yesterday. Far EasTone Telecommunications Co chairman Douglas Hsu, left, announces the start of the company’s 5G services at a news conference in Taipei yesterday, while company president Chee Ching looks on. It has budgeted NT$10.2 billion for capital expenditure this year, mainly for 5G network buildout. 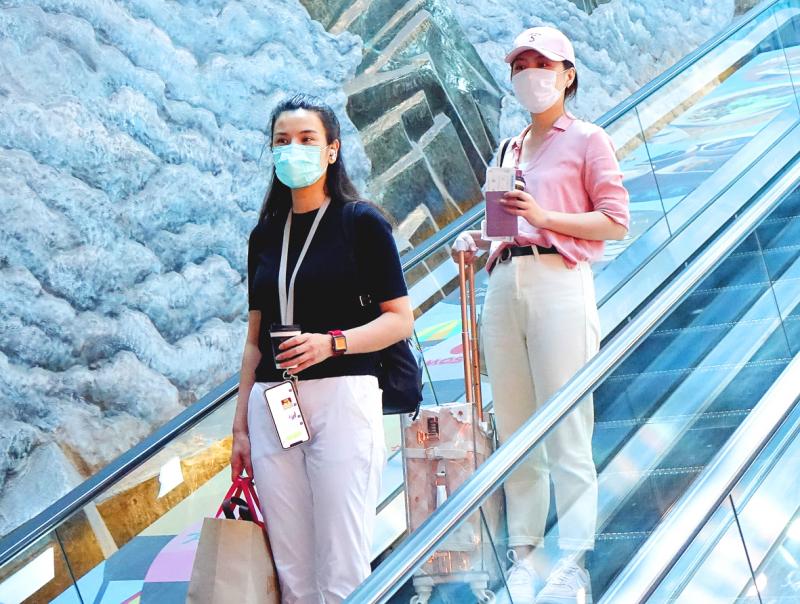 The two reporters — Ai Kezhu (艾珂竹) and Lu Qiang (盧薔) — worked for Fujian Province-based Southeast Television and arrived in Taiwan in December last year. If TV news programming had been produced in Taiwan, then the Chinese journalists must have contravened the law, Chiu said. “Our job in Taiwan is to interview people and ask questions; we don’t make TV programs in Taiwan,” Ai said. Southeast Television journalists had not made any appearances on political talk shows or offered any personal opinions, she said. The objective reporting of Taiwanese issues by Chinese reporters over many years had helped Chinese viewers better understand Taiwan, Zhu said, adding that the rights of Chinese reporters should be protected and respected. 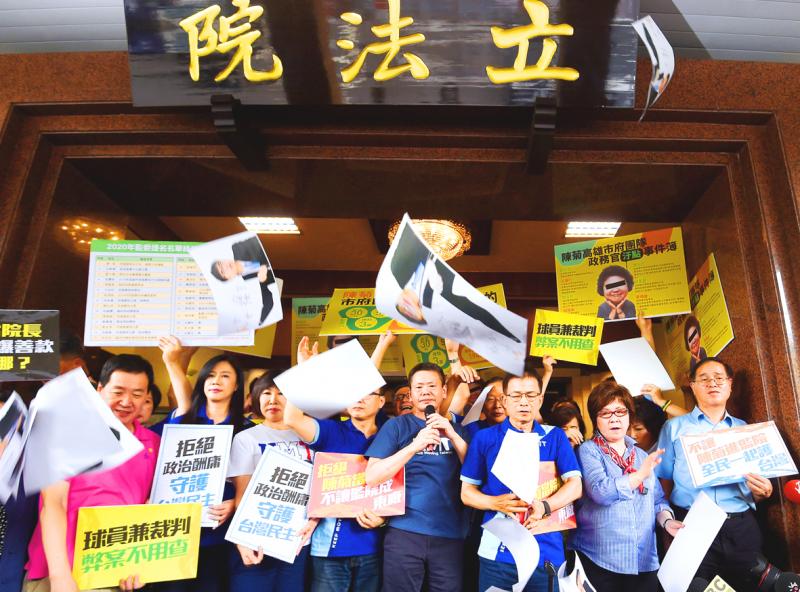 Control Yuan nominees’ legislature visit canceledBLOCKED PLANS? KMT lawmakers had assembled at an entrance, apparently seeking to prevent Chen Chu from entering the Legislative Yuan for a planned courtesy visitBy Chen Yun and Dennis Xie / Staff reporter, with staff writerThe Legislative Yuan at the last minute yesterday canceled a scheduled visit by Chen Chu (陳菊), who has been nominated as Control Yuan president, and other nominees to visit lawmakers, citing “intelligence” it received and other arrangement issues. The KMT caucus opposes Tsai’s nomination of Chen, saying that her qualifications to lead the branch are stained by cases being investigated by the Control Yuan from when Chen was Kaohsiung mayor. If Chen is to become Control Yuan president, she would be “handling her own corruption cases,” which would severely undermine the nation’s constitutional system, the KMT caucus said. The TPP caucus has initiated steps to abolish the Control Yuan and the Examination Yuan with constitutional amendments, making the visit even more unnecessary, Lai said. 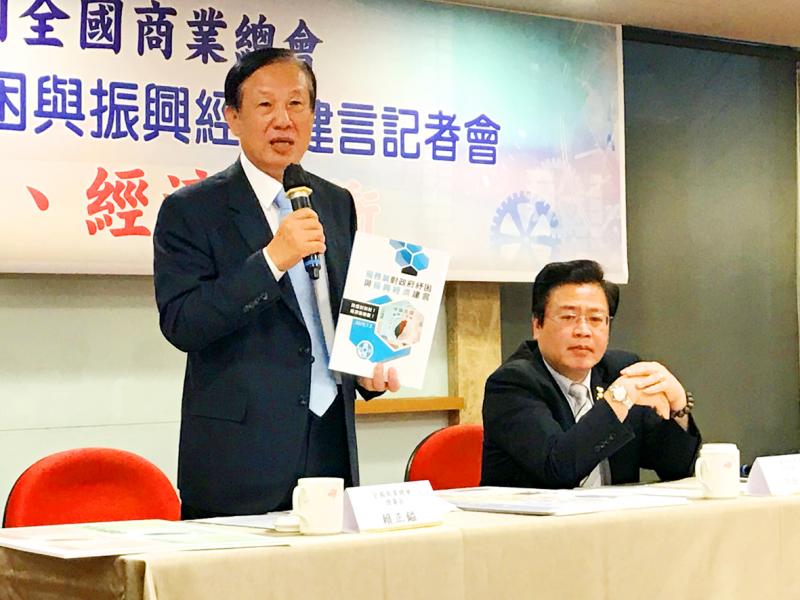 Virus Outbreak: Extend relief programs, business group saysPOLICYMAKING: The General Chamber of Commerce called for a balanced economic development approach, with services and manufacturing accorded the same careBy Crystal Hsu / Staff reporterThe government should extend relief programs by another three months for all businesses other than urban hotels and travel agencies that continue to struggle due to the nation’s border controls, the General Chamber of Commerce (全國商業總會) said yesterday. General Chamber of Commerce chairman Lai Cheng-yi, left, speaks at a news conference in Taipei yesterday as vice chairman Paul Hsu looks on. It is time the government adopts a balanced economic development approach that would take care of all, he added. “A balanced approach is urgent and critical as the virus outbreak is reshaping people’s behavior... Some jobs might be lost forever and policy directions are badly needed to help companies transform and survive,” Lai said.

Ministry orders Tatung to submit minutes of meetingBy Kao Shih-ching / Staff reporterThe Ministry of Economic Affairs on Thursday asked Tatung Co (大同) to submit the minutes of a controversial shareholders’ meeting within five days as a dispute over the legality of its board election on Tuesday raged on. The ministry on Thursday told Tatung to submit supplementary documents within five days or the ministry would return its application, Lee said. Tatung could apply again, but it is supposed to complete the registration within 15 days after the board election, she said. While Wang’s lawyer, Chuang Cheng (莊正), on Tuesday said that shareholders would apply to the ministry to hold a special shareholders’ meeting to defend their rights, Lee said the ministry has not received their application. “While Tatung claimed some shareholders used money from other Chinese investors to buy Tatung shares, no shareholder would admit that,” Lee said. 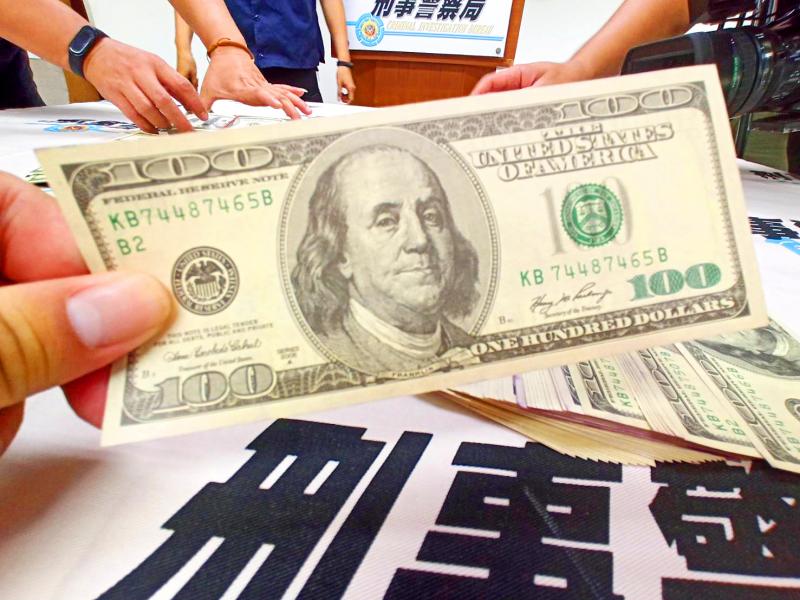 CIB detains three on counterfeiting chargesMORE FAKE MONEY: Officials said they seized fake US$100 bills that contained the same misspelling as US$11.04 million in bills seized in December last yearBy Jason Pan / Staff reporterAuthorities have detained three people for their alleged involvement in counterfeiting US currency, the Criminal Investigation Bureau (CIB) said yesterday. The CIB said an examination of the bills and records was completed at the end of last month. CIB experts said they believe the bills came from a Taiwanese counterfeiting ring in New Taipei City that authorities broke up in December last year. In that case, police arrested five people and seized a total of US$11.04 million in counterfeit US$100 bills. Kaohsiung prosecutors said they intend to indict the three people on fraud charges and offenses related to counterfeiting currency. 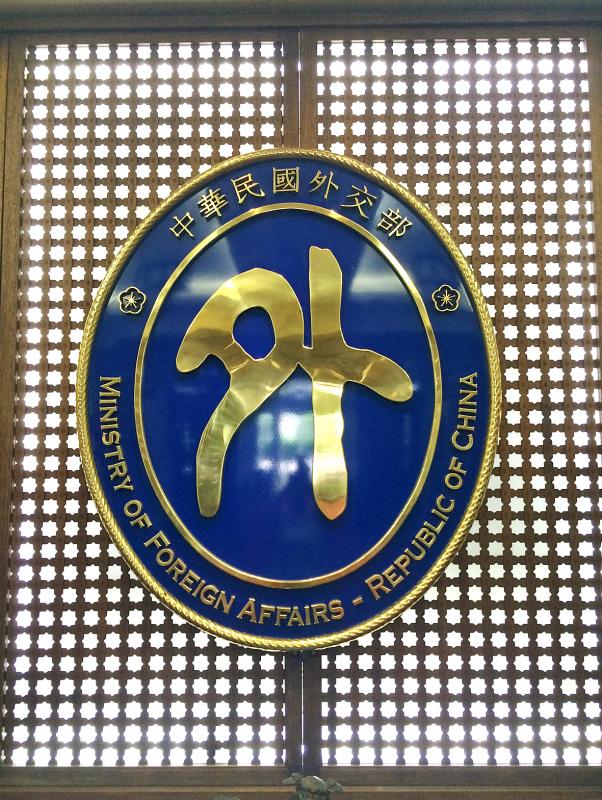 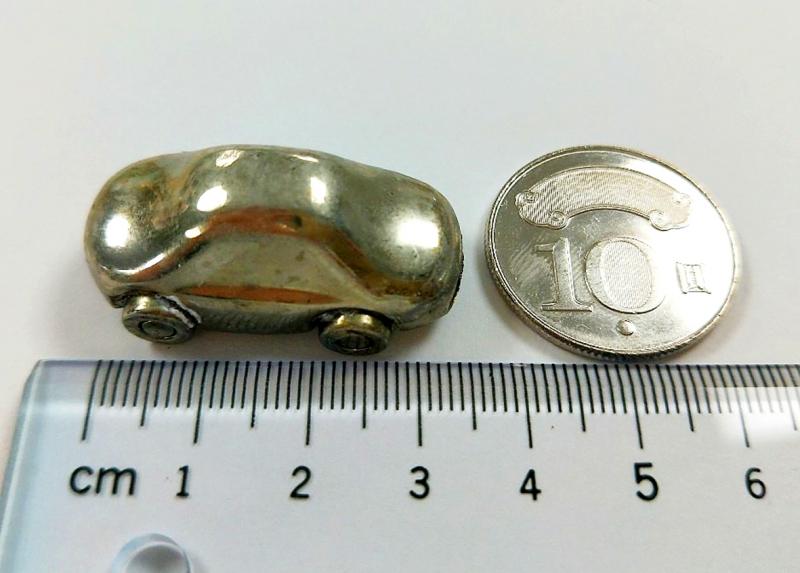 Doctor tells parents to keep kids away from small objects

Doctor tells parents to keep kids away from small objectsBy Tsai Shu-yuan and William Hetherington / Staff reporter, with staff writerA Taichung doctor on Thursday advised parents to keep children away from small objects after he treated a five-year-old boy who swallowed a metal ornament. Swallowing foreign objects is common among children aged six months to six years, with the most commonly swallowed objects being coins, he said. In most cases, objects are passed within four to six days, but there have been cases where it took three to four weeks, he said. Parents should keep small items out of reach of young children and should remain calm if items are swallowed, Lin said. The first thing a parent should do if their child swallows something potentially harmful is to check that the they are breathing normally.

Legislature passes bill to nationalize irrigation groupsBy Huang Hsin-po and Dennis Xie / Staff reporter, with staff writerThe Legislative Yuan yesterday passed the third reading of a bill to convert Taiwan’s 17 irrigation associations into a government body, despite strong opposition from the Chinese Nationalist Party (KMT) and some farmers. There are 17 irrigation associations nationwide and one joint association in Taichung, a Council of Agriculture Web site showed. When the legislature passed amendments to the Act of Irrigation Association Organization (農田水利會組織通則) in 2018 requiring the entities to be legally defined as public juridical persons, the government was already seeking “illegitimate ways” to “infringe upon assets belonging to irrigation associations,” KMT Legislator Kung Wen-chi (孔文吉) said. DPP caucus secretary-general Chung Chia-pin (鍾佳濱) said that if irrigation associations are non-governmental entities, they cannot enforce the law or crack down on people involved in illegal activity related to agricultural irrigation and drainage and their funds for irrigation and drainage come from the council. Council of Agriculture Minister Chen Chi-chung (陳吉仲) said that the council would establish a new irrigation and water conservancy department, with 17 divisions, that would replace the 17 associations. 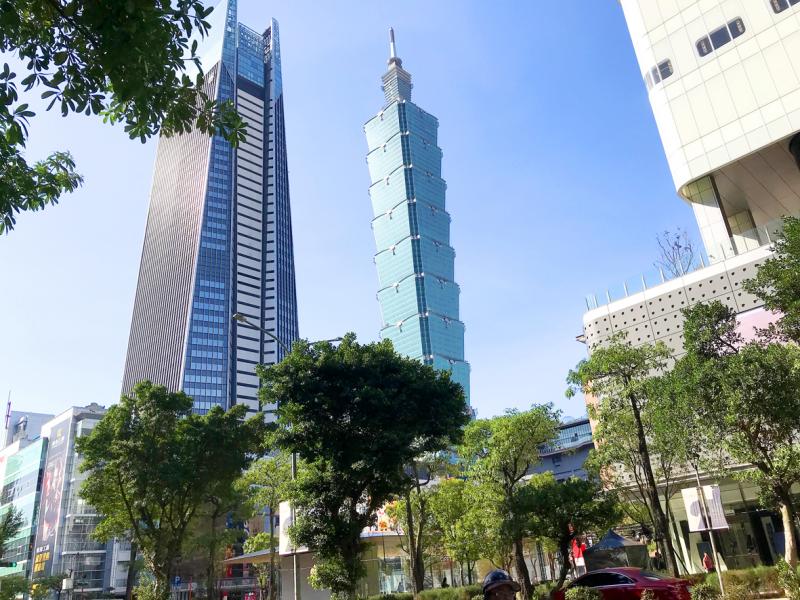 However, the latest data for commercial property deals, a gauge of investment interests, represented a 53.6 percent decline from the same period last year, as the COVID-19 pandemic sidelined buyers. Factory and office buildings constituted the bulk of transactions in Taipei, New Taipei City and Taichung during the April-to-June period, the company’s valuation and advisory services director Wendy Hsueh (薛惠珍) told a news briefing. The Taipei 101 and the Breeze Nan Shan building in Taipei’s Xinyi District are pictured on April 21. Wan Hai plans to turn the Chong Hong building into its new headquarters and use the other office space to accommodate future expansions. Land deals appeared unaffected by the virus downturn with transactions totaling NT$80.1 billion last quarter, Yen said. 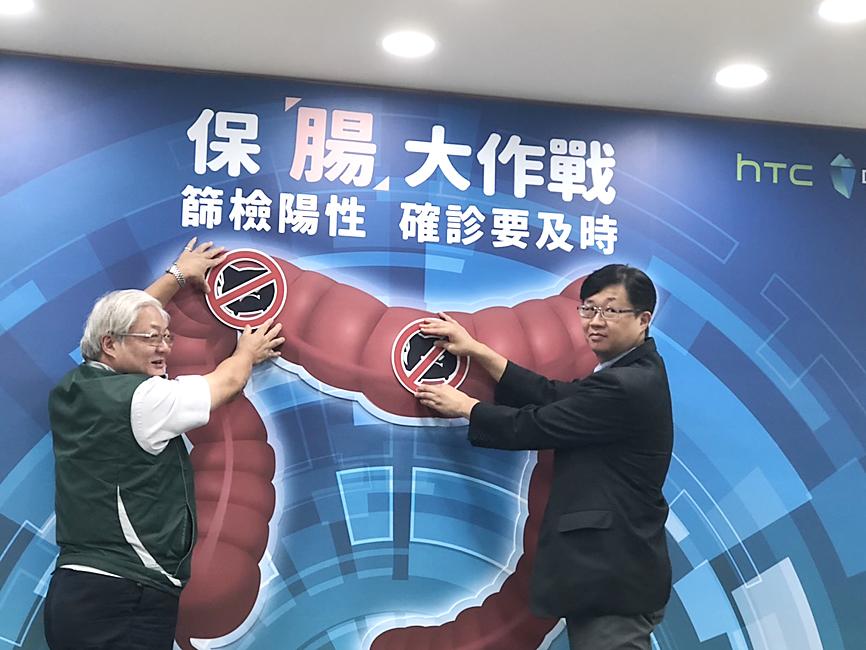 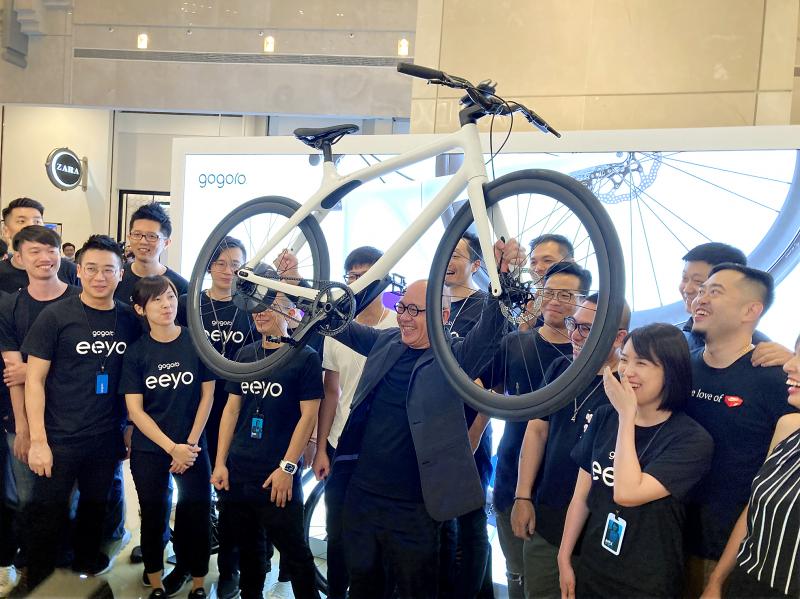 Gogoro showcases its first electric bicycleBy Lisa Wang / Staff reporterGogoro Inc (睿能創意) yesterday launched its first electric bicycle, the Gogoro Eeyo 1, in Taiwan, after unveiling the bike in New York in late May and in France on Tuesday. “The electric bike market is much larger than that of electric scooters,” Luke said. In Germany, 1.8 million electric scooters were sold last year, but sales of electric bikes were two to three times that number, he said. Gogoro has packed all of the bike’s electric components — including a motor, battery and sensors — inside its rear hub. Gogoro said it does not plan to launch sharing services for its electric bikes in the short term.

The two nations have agreed to establish a “Taiwan Representative Office” and “Somaliland Representative Office,” Wu told a news conference in Taipei, after Democratic Progressive Party Legislator Wang Ting-yu (王定宇) a day earlier shared a foreign media report that Somaliland President Muse Bihi Abdi has appointed a representative to Taiwan. While the exact dates for the offices’ launches are still to be negotiated, Taiwan has since Feb. 6 sent officials to Somaliland to make preparations, he said. Somaliland also has representative offices in 22 countries, he said, adding that Taiwan’s measure is no different from that of other countries. Both sides would appoint a senior diplomat and four officers for each new office, Wu said, but withheld the officials’ names. Establishing a representative office does not necessarily lead to establishing formal ties, he added.