General Secretary of the Communist Party of Vietnam (CPV) Central Committee Nguyen Phu Trong (left) and General Secretary of the Communist Party of China (CPC) Central Committee and President of China Xi Jinping. (Photo: VNA)Under the Party’s leadership and the State’s management, forces in charge of foreign affairs have fulfilled their important tasks of contributing to maintaining a peaceful and stable environment at home and raising the country’s position in the international arena, a senior Party official has said.In an interview granted to the Vietnam News Agency regarding Party diplomacy, Le Hoai Trung, member of the Party Central Committee and head of its Commission for External Relations , affirmed that Vietnam has expanded its partnerships in 2022, not only with political parties but also with States and people’s organisations. Party diplomacy has been conducted through various forms such as phone talks, official visits, theory workshops and experience exchanges, among others, he continued.Vietnam and its partners have enhanced their mutual understanding and consolidated their political trust, the official stressed.Trung highlighted Vietnam's relations with neighbouring countries, recalling the official visit to China by Party General Secretary Nguyen Phu Trong in late 2022, which was a success across spheres.Vietnam celebrated the 60th founding anniversary of diplomatic ties and 45 years of the signing of the Treaty of Amity and Cooperation with Laos, and the 55th anniversary of diplomatic ties with Cambodia this year, with an array of practical and diverse activities organised.The country has also joined a number of diplomatic activities of political parties in Southeast Asia, including those between them and their international partners, he added.The official also emphasised Vietnam's relations with countries in Asia, Europe, America and Latin America, which have been fostered through phone talks, meetings, visits and experience exchanges.

(Photo: VNA)Hanoi (VNA) – The Ministry of Agriculture and Rural Development on December 30 announced that the agricultural sector has achieved all goals set for this year, including a growth rate of 3.36%, a record for many recent years. The export revenues of agro-forestry-fishery products reached a new record of 53.22 billion USD, 9.3% higher than that of 2021, with a trade surplus of over 8.5 billion USD. The domestic market has received more attention while the Government and the sector made efforts to promptly remove trade barriers, boosting the exports of agricultural, forestry, and fishery products. In 2023, the agriculture sector targets a growth rate of 3% and export revenue of 54 billion USD. It aims to have 78% of communes and at least 270 districts nationwide recognised as new-style rural areas./. 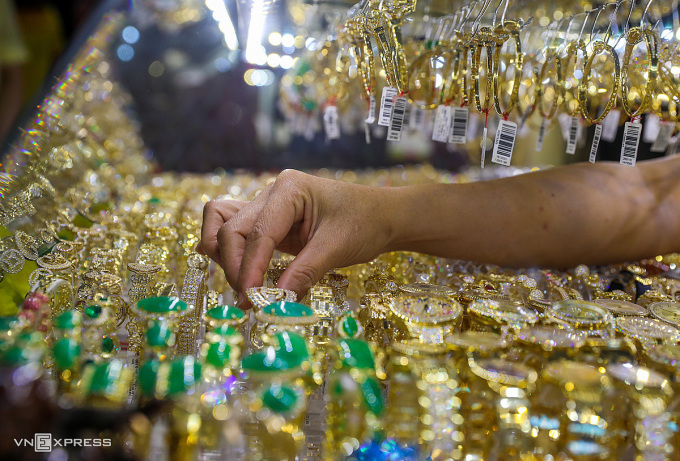 Photo by VnExpress/Nhu QuynhVietnam consumes nearly 50 tons of gold jewelry each year, with 80% absorbed by HCMC, according to the Saigon Jewelry Association (SJA). Businesses have not been allowed to import raw gold since May 2012, but consumption of the precious metal has still increased stealthily every year, said SJA. In recent years, the export turnovers of Vietnamese gold jewelry have stood at $20-30 million per year. Vietnam gold companies churn out more than 11 million gold products weighing over 40 tons, thanks to an industry that employ over 38,000 jewelers, according to SJA. However, the ban on importing raw gold has caused difficulties for gold companies because there are differences between gold prices in international and local markets.

Illustrative image (Photo: VNA)Hanoi (VNA) – Vietnam’s GDP growth reaches 8.02% this year, a record high in the 2011-2022 period as the economy is recovering strongly, General Director of the General Statistics Office (GSO) Nguyen Thi Huong told a press conference in Hanoi on December 29. The agro-forestry-fishery sector expanded by 3.36%, contributing 5.11% to the total added value of the whole economy. The industry-construction sector grew by 7.78%, contributing 38.24% while the service industry rose by 9.99%, making a 56.55% contribution to the economy. With an annual growth of 7.18%, final consumption contributed to 49.32% of the general growth. GSO General Director Nguyen Thi Huong (Photo: VNA)Thanks to the Government's and Prime Minister’s directions, the macro-economy remained stable with inflation put under control and major balances guaranteed.

An overview of the meeting (Photo: VNA)– Deputy Minister of Foreign Affairs Le Thi Thu Hang hosted a reception for Queen Mother of Bhutan Gyalyum Dorji Wangmo Wangchuck in Hanoi on December 28, during which the host affirmed that Vietnam always attaches great importance to its friendship relations with Bhutan.Welcoming the Bhutan Queen Mother's visit to Vietnam for the first time, Hang said that although the two countries have set up their diplomatic relations just for 10 years, the bilateral friendship and cooperation have grown positively with a bright spot being tourism partnership.She thanked Bhutan for supporting Vietnam’s candidacy to the UN Human Rights Council for the 2023-2025 tenure, expressing hope that the Queen Mother and the Royal Family of Bhutan will continue to promote cooperation with Vietnam at international and regional forums, especially UN bodies.For her part, the Queen Mother said that she was impressed at the strong growth of Vietnam in all aspects. She showed admiration for the nation, people and spirit of Vietnam during the past struggle for national defence and current process of national development.She said that after Bhutan opened its door again for visitors earlier this year, Vietnam has become the second largest source of tourists to Bhutan with 6,000 visitors.At the meeting, the two sides agreed to continue to increase the exchange of delegations as well as bilateral partnership in economy, culture, tourism, and people-to-people exchanges. The two countries will work together for the opening of a direct air route in the time to come.On the occasion, Hang conveyed Vietnamese leaders’ best regards to King of Bhutan Jigme Khesar Wangchuck and Queen Jetsun Pema./.

A Veloz Cross made in Vietnam (Photo: VNA)– Toyota Vietnam launched made-in-Vietnam units of its Veloz Cross and Avanza Premio car models in the northern province of Vinh Phuc on December 28.Director General of Toyota Vietnam Hiroyuki Ueda described the move as an important milestone of the carmaker in the country and also the affirmation of its commitment to promoting local automobile manufacturing.Veloz Cross and Avanza Premio made debut in Vietnam in March 2022 as completely built units imported from Indonesia.Since then, they have recorded monthly sales of over 1,000 units, reaching over 16,000 in total by the end of November. Notably, Veloz Cross has continually been among one of the best-selling cars and topped the seven-seater ones with a market share of 40.3%.As the supply of imported vehicles is limited, the production of Veloz Cross and Avanza Premio at the manufacturing and assembly line in Vinh Phuc is a step to help the firm increase supply and the rate of locally made components in its automobiles.Nguyen Trung Hai, Standing Vice Chairman of the provincial People’s Committee, said Toyota Vietnam has obtained many achievements in production and business activities, substantially contributing to Vietnam’s automobile industry and local socio-economic development. Vinh Phuc recorded more than 40 trillion VND (1.7 billion USD) in budget revenue in 2022, including over 10 trillion VND contributed by Toyota – up 9% from last year, he noted, adding that local authorities pledge the best possible conditions for the company as well as others to develop business operations./.

– An additional 163 COVID-19 infections were recorded in Vietnam on December 26, according to the Ministry of Health.The new infections brought the country’s total number of COVID-19 cases to 11,524,436.Meanwhile, 27 patients were declared to be free from the disease on the day, lifting the total number of recoveries to 10,610,831.The death toll from the disease was still kept at 43,184, accounting for 0.4% of the total infections, as no fatality was logged on the day.More than 265.38 million COVID-19 vaccine doses have been administered in the country so far./.

Birds are seen at Tram Chim National Park in the Mekong Delta province of Dong Thap - the world's 2,000th Ramsar site. (Photo: VNA)Hanoi (VNA) – Vietnam is ranked 16th out of the 25 countries with the richest biodiversity in the world, as more than 11,000 species have been discovered in the country. For effective marine conservation, Vietnam’s Ministry of Agriculture and Rural Development has been consulting the Government to issue support policies, and invest in essential infrastructure items of the marine protected areas. According to the ministry, it is also necessary to have policies to support the implementation of co-management in the protection of aquatic resources. Government's support is also needed to help fishermen working in marine protected areas to shift their livelihood to environmentally-friendly ones./. In particular, he noted, in its sixth session, the 13th Party Central Committee also underlined the need to strongly apply science and technology while bringing into play the human factor in journalism activities. Reports showed that Vietnam has more than 860 urban areas, and the urbanisation rate increased to nearly 40% in 2021. Le Thi Kim Oanh from Van Lang University said the carbon-neutral urban model is a new trend aimed at promoting sustainable environmental development in Vietnam. Vietnam well conducts pre-deployment training for peacekeepersParticipating in the United Nations (UN) peacekeeping activities represents a new development in the international integration capacity of the Vietnam People’s Army. Best local photographic works of the year announcedThe best 28 photographic works taken in Vietnam this year were recently unveiled by the Vietnam Association of Photographic Artists (VAPA).

Hanoi (VNA) – GDP growth faster than expected, border reopening, and fuel shortages in many localities are among the top 10 events that shaped Vietnam in 2022, as selected by Vietnam News Agency. Total foreign trade is estimated at 750 billion USD up 12.18%, according to the General Department of Vietnam Customs. Data from the Ministry of Information and Communications showed that revenue in the digital economy in 2022 increased by over 10% year-on-year to 148 billion USD. As directed by the Government, the Ministry of Finance, the Ministry of Industry and Trade, and the State Bank of Vietnam promptly carried out solutions to tackle this situation. It was the first time Vietnam qualified for the finals.

NA General Secretary Bui Van Cuong announces the NA Standing Committee’s conclusion about the organising of the second extraordinary session (Photo: VNA)- The second extraordinary session of the 15th National Assembly (NA) will open on January 5, 2023, with an agenda full of many important issues, according to a conclusion of the NA Standing Committee.The session will examine the national master planning for the 2021-2030 period with a vision to 2050; a draft Law on Medical Examination and Treatment (revised); and personnel work.The NA will also consider and decide the continued implementation of some COVID-19 prevention and control policies and the extension of the validity of medicine and medical materials circulation licences, along with a number of issues related to finance and budget, and some NA deputies affairs.The NA Standing Committee asked the verification agencies to work closely with drafting agencies to carefully review the draft bills and resolutions before submitting to the NA for discussion and approval.The Government and NA agencies as well as relevant agencies should finish the preparations of documents for the session and deliver them to NA deputies at least seven days before the opening of the session, the NA Standing Committee requested.As there will be no meetings with voters before and after the session, NA deputies were asked to work with the Vietnam Fatherland Front (VFF) Committees at localities to gather ideas and requests of voters through flexible methods and submit them to the Ombudsman Committee and VFF Central Committee for summarising./.